Both food and cash crops are produced mainly on small scale although there is some estate growing of tea. The food crops grown include maize, rice, wheat, potatoes, beans, cassava and bananas where as cash crops include vegetables, fruits, Irish potatoes, coffee, paddy, tea, sisal and cotton. Some products especially fruits and vegetables are facing storage, transportation and marketing problems.

Lushoto District receives rainfall on a bimodal pattern, with short rains from October to December and long rains from March to June.

The highlands get an average of 800 – 2,000mm rainfall per annum and the lowlands get about 500 - 800 mm per year from October to December and long rains from March to June with heaviest period of long rains in April.

The short rains are less reliable than the long rains but they are the most important for growing seasonal and annual crops like maize and beans adapted to temperature greater than 200C because such temperature is prevalent in Lushoto from October to March.

The mountainous areas of Lushoto are cooler and less humid than the coastal areas of Tanga Region. The high temperature is experienced in the periods of October to February and lowest temperatures occur in the period of June to August.

In general the Agro ecological zones described below have different temperature and rainfall patterns.

Lushoto District Council can be zoned into five agro-ecological zones that are humid warm, dry hot, humid cold, dry warm and dry cold. The categorization is based on the altitude, rainfall, temperature and humidity.  Based on such characteristics, such zones offer different cropping patterns/possibilities.

The zone is elevated at an altitude between 300 to 600 meters above sea level. The area is in lowland and experience little amount of rainfall ranging from 400 to 600 mm that cannot support most of agricultural activities. The crops grown are cotton, sisal, rice and cassava.

This area covers most of the Umba Division and is dwelt by pastoralists. It is the hottest zone as its temperature goes up to 300C.

The zone has an altitude between 800 to 1,500 meters above sea level. The areas receive rainfall of about 600 - 1,200 mm with an annual mean temperature of 220C. The crops grown are coffee, vegetables, bananas, potatoes and fruits. The areas are found in LUSHOTO division.

It covers an area which lies at an altitude between 800 – 1,800 meters above sea level and get a mean temperature of 200C and amount of rainfall that ranges 500 - 800 mm. The area has four periods of dry period and northeast trade winds, which causes short rains between October to December.

Due to the nature of climate (low amount of rainfall) only subsistence farming is practiced and crops grown are maize, beans, cassava and vegetables (mainly at the valley bottom). A zone covers one division of Mlola.

The areas found in this zone include Mtae division and Upper Mlalo. It lies between 1,700 - 2,100 meters above sea level.

The zone has rainfall ranging between 500 - 800 mm.  The annual mean temperature is 160C. The crops grown includes, vegetables, fruits and Irish potatoes and are found in areas of Rangwi and Shume 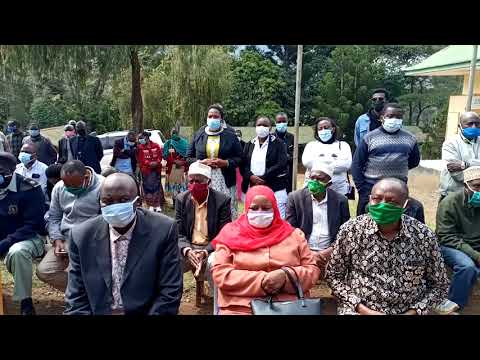